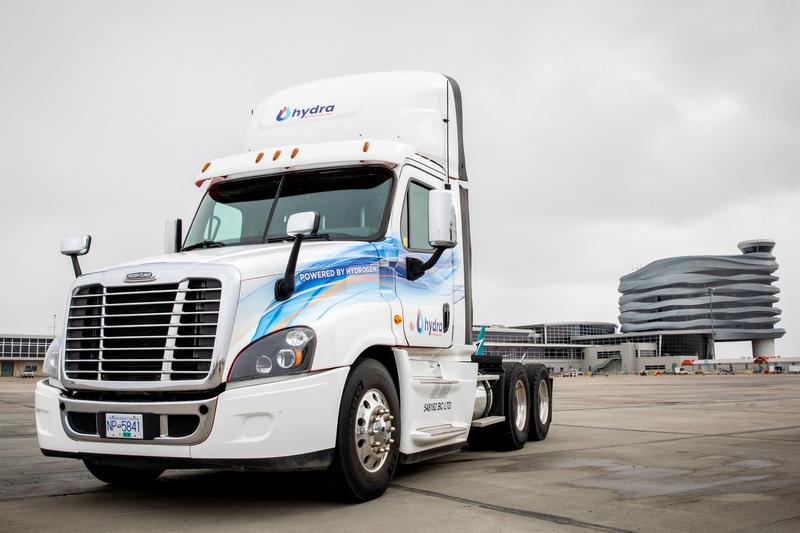 This follows on Hydra's announcement last week of the expansion of its Hydrogen-as-a-Service (HaaS) offering into Alberta with the signing of its second paying fleet customer, Edmonton-based Veteran Express Secure Logistics (VEXSL).

Under the terms of the MOU, Hydra will convert EIA's light, medium, and heavy-duty fleet vehicles and other specialized equipment in airside and restricted areas of the airport using its proprietary hydrogen-diesel, co-combustion system.

This will reduce emissions by up to 40 per cent per vehicle without negatively impacting performance at no cost to the airport.

"At EIA, innovation is everything when it comes to our industry-leading sustainability efforts," said Myron Keehn, Vice President, Air Service and Business Development at EIA. "When we saw Hydra's practical retrofit approach to decarbonizing fleets right now, we knew this was the transition step we wanted to take to further minimize our airport's impact on the environment. We want this to become an airport decarbonization model for other transportation hubs around the world and look forward to working with Hydra to make this happen."

As airports around the world work to reduce their emissions from all aspects of operations, EIA became the first airport globally to join The Climate Pledge back in the spring of 2021, committing to being carbon neutral by 2040. They are also an Airport Carbon Accreditation member, the only global carbon management certification program for airports.

By partially running their airport vehicles on hydrogen once Hydra's hydrogen tanks and gas handling components are installed on the back of the cab and a dedicated, secondary controller is installed in the dashboard to control hydrogen flow, up to 40% of diesel will automatically be displaced per vehicle. Converted vehicles will also refuel their hydrogen as quickly as diesel and will not experience any loss in fuel efficiency, range, power, torque, or payload capacity.

"As fixed entities within the aviation industry, airports have a unique responsibility to their surrounding communities and like the EIA, are making significant strides towards Net Zero. We're honoured to work with EIA to provide an economical, near-term solution for the EIA to further reduce its environmental impact while simultaneously helping other fleets in the region leverage hydrogen to reduce their own emissions," added Hydra Energy CEO, Jessica Verhagen. "EIA is a leader in sustainability and by partnering with Hydra we not only further our reach into Alberta, we also become part of EIA's template to airports around the world to improve their environmental impacts."

Edmonton International Airport (EIA) is a self-funded, not-for-profit corporation driving economic prosperity for the Edmonton Metropolitan Region. EIA is Canada's fifth-busiest airport by passenger traffic and the largest major Canadian airport by land area. EIA's Airport City Sustainability Campus is home to companies focused on tourism, entertainment, cargo logistics, manufacturing, sustainability, and technology development and commercialization. As a result, EIA generated an economic output of over $3.2 billion and supported over 26,000 jobs pre-pandemic. At its core, EIA believes equity and diversity is a strength and creating an inclusive space is both a privilege and is a fundamental responsibility.