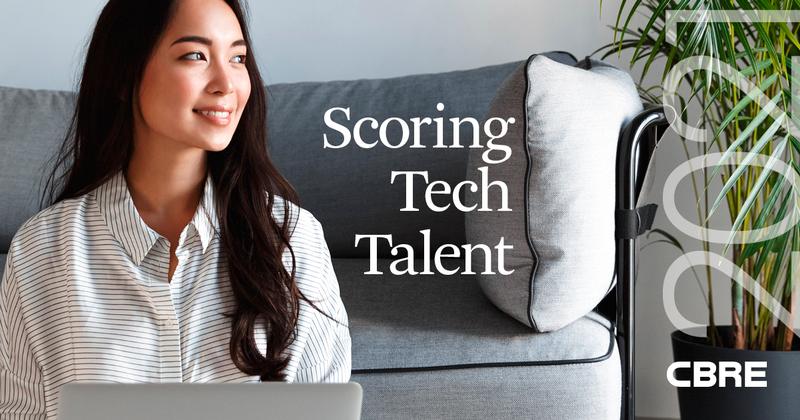 Vancouver, BC, July 15, 2021--(T-Net)--Eight Canadian cities are featured in CBRE's 2021 Scoring Tech Talent report, including bustling tech hub Toronto, which held onto its #4 spot in the North American ranking.

The report offers compelling evidence that tech-talent employment in North America weathered the pandemic better than most other professions, particularly in Canada, where tech jobs increased in six of the country's eight major markets over the past year by an average of 16 percent.

Ottawa ranks #10 on the list, moving up an impressive four spots from last year, while Vancouver moved up one spot to #11, Montreal held steady at #16 and Calgary jumped six spots to #28.

Three Canadian markets make inaugural appearances in this year's ranking: Waterloo Region, with 47 percent growth in tech talent employment since 2015, debuts at #21; Quebec City at #34; and Edmonton, North America's fastest-growing tech market over the past five years, at #38.

"The past year underscored Canada's status as a leading destination for employers seeking tech talent," said CBRE Canada Vice Chairman Paul Morassutti. "We've all come to appreciate the vital role that tech plays in our lives, especially during the pandemic, but it's also a key driver of the Canadian economy and securing tech talent has never been more essential."

Post-pandemic, the size of a market's tech talent labour pool will be a key indicator of a region's economic recovery. Among the Top 10 "most tech" markets in North America by labour concentration, six are Canadian. Ottawa is the highest ranked market in North America for tech employment concentration, with tech jobs making up 11.6 percent of total jobs there. Toronto and Waterloo Region are right behind at third and fourth, with Montreal, Vancouver and Quebec City ranking seventh through ninth, respectively.

CBRE's Tech Talent report also ranks the Next 25 emerging tech markets by a narrower set of criteria. Halifax is ranked seventh on the list with 24 percent tech job growth in the past five years. London, ON, is ranked 10th, with 67 percent tech employment growth in the same period.

Tech talent is defined as 20 key tech professions - such as software developers and systems and data managers - across all industries. Numerous indicators underscore the resilience of tech talent during the pandemic.

"Many factors already are in place to fuel strong tech-talent job growth this year and beyond, including demand for tech to facilitate continued remote work, robust e-commerce growth and streaming services," said Todd Husak, Managing Director of CBRE's Tech & Media Practice Group. "Big tech markets will gain from their established pipelines of tech graduates and many workers' return to city centres. Smaller markets will reap benefits from their cost advantages in labor and real estate as well as the tech industry's embrace of remote work for certain employees."

In Canada, CBRE Limited employs 2,200 people in 22 locations from coast to coast. Please visit our website at www.cbre.ca.