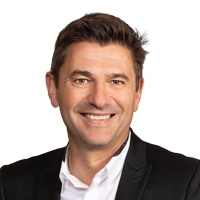 "James' promotion to Chief Commercial Officer goes hand-in-hand with the success of our lead clinical candidate, zanidatamab, and its progression toward potential commercialization," said Ali Tehrani, Ph.D., President and CEO at Zymeworks. "Zymeworks' commercial organization is growing under James' leadership and is focused on achieving rapid and broad access to our potential medicines for patients around the world who need them."

Zymeworks is also recognizing the tremendous career accomplishments and future ambitions of John Babcook through the creation of a new position: Distinguished Fellow.

In this role John will expand his efforts as a scientific liaison for Zymeworks, leveraging his wide-ranging network to identify new opportunities for the Company. John holds 14 patents and is the recipient of LifeSciences British Columbia's Innovation and Achievement Award and the Dr. Don Rix Award for Lifetime Achievement.

"John's illustrious career spans over 25 years and has been characterized by his commitment to making the world a better place through science," said Tony Polverino, EVP, Early Development and Chief Scientific Officer at Zymeworks. "John has tenaciously worked on innovative approaches to identify, characterize and develop antibody-based therapies that have the potential to transform patients' lives. His broad experience in drug discovery and development will enable him to identify early-stage scientific concepts that could lead to important therapeutic breakthroughs for patients."

Zymeworks is a clinical-stage biopharmaceutical company dedicated to the development of next-generation multifunctional biotherapeutics. Zymeworks' suite of therapeutic platforms and its fully integrated drug development engine enable precise engineering of highly differentiated product candidates. Zymeworks' lead clinical candidate, zanidatamab (ZW25), is a novel Azymetric™ bispecific antibody which has been granted Breakthrough Therapy designation by the FDA and is currently enrolling in a pivotal clinical trial for refractory HER2-amplified biliary tract cancer (HERIZON-BTC-01) as well as several Phase 2 clinical trials for HER2-expressing gastroesophageal and breast cancers. Zymeworks' second clinical candidate, ZW49, is a novel bispecific HER2-targeting antibody-drug conjugate currently in Phase 1 clinical development and combines the unique design and antibody framework of zanidatamab with Zymeworks' proprietary ZymeLink™ linker and cytotoxin. Zymeworks is also advancing a deep preclinical pipeline in oncology (including immuno-oncology agents) and other therapeutic areas. In addition, its therapeutic platforms are being leveraged through strategic partnerships with nine biopharmaceutical companies. For additional information about Zymeworks, visit www.zymeworks.com and follow @ZymeworksInc on Twitter.