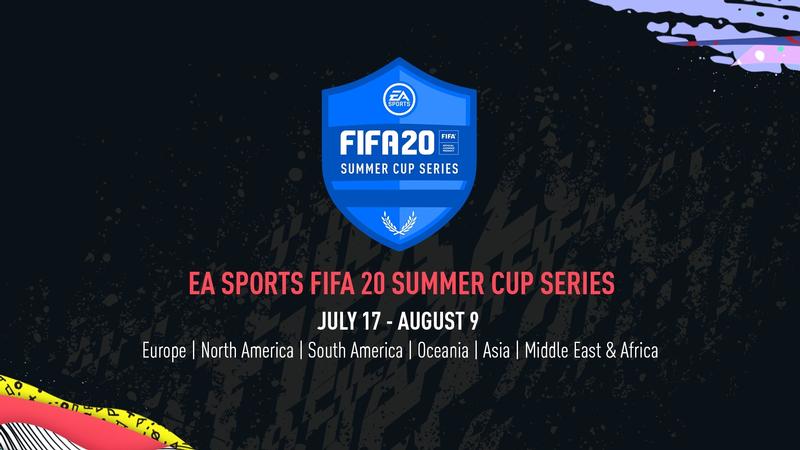 These extensive updates will continue to keep players and viewers connected to EA SPORTS FIFA competition, building upon the global success of the EA SPORTS FIFA Stay and Play Cup, which aired to millions in more than 100 countries, and unprecedented growth in viewership across EA SPORTS FIFA content from last year with 260 percent growth*.

The EA SPORTS FIFA 20 Summer Cup Series is made up of six online regional tournaments featuring invited top players across Europe, Asia, South America, Oceania, North America, and Middle East-Africa, all competing to be crowned one of six winners. The total prize pool created for the Summer Cup Series is $228,000, with the tournaments running from July 17 - August 9.

"We've already seen amazing fan engagement with our competitive events over the past few months. Our partnership with the top football leagues have resulted in over 100 hours of TV broadcasts alone and now we're looking forward to offering players and viewers even more great competitions to play and watch," said EA SPORTS FIFA Competitive Gaming Commissioner Brent Koning. "Although replacing fan-favorite, in-person tournaments were unavoidable as we prioritize player safety, we are thrilled to have more events this summer than ever before in FIFA esports."

"We are looking forward to rolling out exciting alternative events to the previous FIFA 20 Global Series events over the coming weeks, all whilst ensuring safety and the highest possible tournament standards to the competitors which could not be guaranteed for the initially scheduled events due to the current situation and online-only format limitations for global activations being in place," said Christian Volk, Director of Gaming and eFootball at FIFA. "In these challenging times, we're committed to supporting our stakeholders, players, fans and the wider community to stay engaged with their audience via EA SPORTS FIFA. We'll also continue working together with FIFA's member associations to host eFriendlies all around the world and to bring virtual football to fans in each country."

Additionally, many of the world's top football leagues, including Bundesliga, LaLiga, Ligue 1, MLS and more, are resuming EA SPORTS FIFA 20 esports events under revised formats. Fans can also tune into the UEFA eChampions League which will transition to a special one-off online invitational event in mid-August. More information on the subsequent EA SPORTS FIFA 20 league partner esports announcements can be found by visiting their respective websites.

Tournaments that will not proceed in the wake of current events include the EA SPORTS FIFA 20 FUT Champions Cup Stage VI, FIFA eNations Cup™ 2020, EA SPORTS FIFA 20 Global Series Playoffs and the FIFA eWorld Cup™ 2020. These tournaments require global, in-person events and could not be executed online.

For all the details on the EA SPORTS FIFA 20 Summer Cup Series, eChampions League tournament, and more, visit www.ea.com/games/fifa/fifa-20/compete/news/esports-evolution-updates.

*source data provided by Stream Hatchet comparing May 2019 vs. May 2020 Twitch watch hours.

EA SPORTS, Battlefield, Apex Legends, The Sims, Need for Speed, Titanfall and Plants vs. Zombies are trademarks of Electronic Arts Inc. FIFA, Madden and NFL are properties of its respective owners and used with permission.