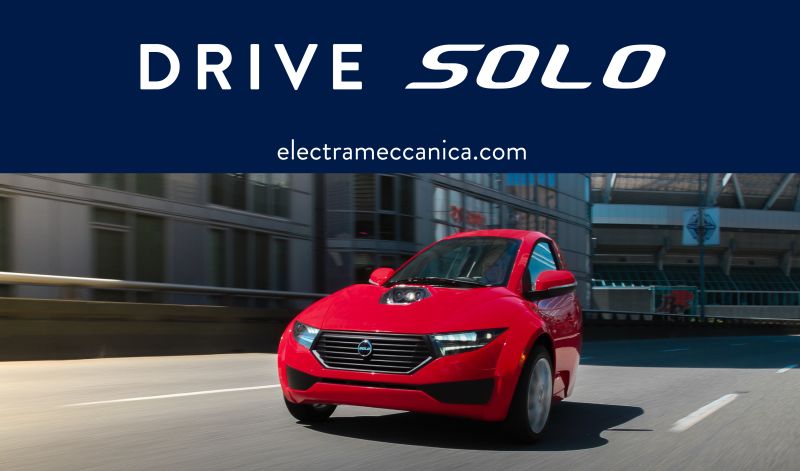 Vancouver, BC, October 6, 2020--(T-Net)--ElectraMeccanica Vehicles Corp. (NASDAQ: SOLO), a designer and manufacturer of electric vehicles, announced today that it is providing an update related to its ongoing search for the Company's future U.S. based assembly facility and engineering technical center.

Since late February, the Company has been engaged with BDO USA's Site Selection & Incentives Practice ("BDO") in a nationwide review of potential locations that matched ElectraMeccanica's criteria.

BDO initially identified seven candidates and sent initial requests for proposal to the chief economic development entities in each state. In June, following comprehensive proposal reviews and site visits at select locations, the Company narrowed the candidate list to five. In August, the list was further narrowed to three states.

Today, ElectraMeccanica has announced the remaining two finalists as Arizona and Tennessee.

Within each finalist state, the Company has selected two finalist sites within the Phoenix, AZ metro area and the Nashville, TN region, respectively.

Along with BDO, the Company is now conducting final site and proposal reviews before making a selection at the end of November 2020.

The proposed new U.S. facility is expected to create between 200 and 500 new jobs and feature a state-of-the art engineering technical center, including plans for multiple labs to support ongoing vehicle, chassis and power electronics testing as well as comprehensive research facilities.

ElectraMeccanica also reported that it anticipates this new facility will generate additional, second order effects that would positively impact the local and state economy within its selected location through increased commercial activity and its business partnerships with tier one suppliers.

To date, the Company says it has seen strong interest in the commercial fleet and utility sectors, supporting its plans for a future pilot SOLO ecosystem in the select region.

Collectively, the operation would be expected to meet the growing demand for SOLO EVs throughout the United States, where EVs are projected to exceed more than 30% of all passenger vehicles by 20401. In addition to the SOLO being classified as "Made in the USA," the proposed new U.S. -based facility would allow ElectraMeccanica to reduce or potentially eliminate tariffs as well as benefit from logistical efficiencies.

In conjunction with the proposed new ElectraMeccanica U.S. facility, Zongshen will continue to manufacture SOLO EVs for the global market, while also supplying knock-down kits for assembly in the United States. The Company has begun commercial production with future deliveries of the SOLO EV expected this fall.

"We have been very impressed with the locations and proposals we've reviewed and are looking forward to reaching an agreement that would mutually benefit both ElectraMeccanica as well as our future state and local partners," said Company CEO Paul Rivera. "When fully operational, our facility should contribute hundreds of jobs to the local economy as well as have a positive impact on the community at-large. We are excited to be a part of the catalyst for local and state initiatives to drive growth for the U.S. economy and the EV sector.

"For ElectraMeccanica, we remain focused on guaranteeing the key components that will position us for long-term sustainability, most notably mitigating supply chain and tariff risk, thereby enabling the SOLO to become an American-made product. We also want to select a partner that will work with us in establishing a major proof-of-concept for the SOLO ecosystem with urban solutions for personal, commercial, utility and fleet applications."

Tom Stringer, Leader for the National Site Selection & Business Incentives Practice, BDO USA, added: "Despite the challenges of COVID-19 on the economy and the limits of domestic travel this year, ElectraMeccanica's project remains on track to select a winner prior to year-end as originally planned. Our ability to remain on track really is a tribute to how well our state and local partners have fully embraced the regional economic impact that the SOLO electrified ecosystem represents. The potential new jobs, construction of engineering and assembly centers, deployment of a pilot testing program, and the migrating supply chain to support this project will collectively serve as a game changer for the winning region."

ElectraMeccanica Vehicles Corp. (NASDAQ: SOLO) is a Canadian designer and manufacturer of environmentally efficient electric vehicles (EVs). The company's flagship vehicle is the innovative, purpose-built, single-seat EV called the SOLO. This three-wheeled vehicle will revolutionize the urban driving experience, including commuting, delivery and shared mobility. The SOLO provides a driving experience that is unique, trendy, fun, affordable and environmentally friendly. InterMeccanica, a subsidiary of ElectraMeccanica, has successfully been building high-end specialty cars for 61 years. For more information, please visit www.electrameccanica.com.

Except for the statements of historical fact contained herein, the information presented in this news release and oral statements made from time to time by representatives of the Company are or may constitute "forward-looking statements" as such term is used in applicable United States and Canadian laws and including, without limitation, within the meaning of the Private Securities Litigation Reform Act of 1995, for which the Company claims the protection of the safe harbor for forward-looking statements. These statements relate to analyses and other information that are based on forecasts of future results, estimates of amounts not yet determinable and assumptions of management. Any other statements that express or involve discussions with respect to predictions, expectations, beliefs, plans, projections, objectives, assumptions or future events or performance (often, but not always, using words or phrases such as "expects" or "does not expect", "is expected", "anticipates" or "does not anticipate", "plans, "estimates" or "intends", or stating that certain actions, events or results "may", "could", "would", "might" or "will" be taken, occur or be achieved) are not statements of historical fact and should be viewed as forward-looking statements.

Such forward-looking statements involve known and unknown risks, uncertainties and other factors which may cause the actual results, performance or achievements of the Company to be materially different from any future results, performance or achievements expressed or implied by such forward-looking statements. Such risks and other factors include, among others, the availability of capital to fund programs and the resulting dilution caused by the raising of capital through the sale of shares, accidents, labor disputes and other risks of the automotive industry including, without limitation, those associated with the environment, delays in obtaining governmental approvals, permits or financing or in the completion of development or construction activities or claims limitations on insurance coverage. Although the Company has attempted to identify important factors that could cause actual actions, events or results to differ materially from those described in forward-looking statements, there may be other factors that cause actions, events or results not to be as anticipated, estimated or intended.

There can be no assurance that such statements will prove to be accurate as actual results and future events could differ materially from those anticipated in such statements. Although the Company believes that the expectations reflected in such forward-looking statements are based upon reasonable assumptions, it can give no assurance that its expectations will be achieved. Forward-looking information is subject to certain risks, trends and uncertainties that could cause actual results to differ materially from those projected. Many of these factors are beyond the Company's ability to control or predict. Important factors that may cause actual results to differ materially and that could impact the Company and the statements contained in this news release can be found in the Company's filings with the Securities and Exchange Commission. The Company assumes no obligation to update or supplement any forward-looking statements whether as a result of new information, future events or otherwise. Accordingly, readers should not place undue reliance on forward-looking statements contained in this news release and in any document referred to in this news release. This news release shall not constitute an offer to sell or the solicitation of an offer to buy securities.