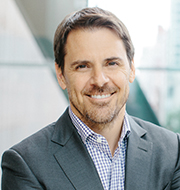 Vancouver, BC, December 1, 2017--(T-Net)--LifeSciences BC announced that Richard Osborn has joined the LifeSciences BC Board of Directors. Richard is the Managing Partner of TELUS Ventures, the strategic investment arm of TELUS Corporation.

Before joining TELUS Ventures in 2016, Richard was the founder and Managing Partner of RecapHealth Ventures, a leading Canadian-based investor in North American health care companies.

Prior to founding RecapHealth, Richard was a partner in a private equity firm acquiring majority ownership positions in leading mid-market companies. He was a co-founder of an institutionally supported venture capital fund and co-managed two Business Development Bank of Canada (BDC) funds with additional external general partners. Richard is a strong believer in using financial tools to effect positive social change.

He is a founder of one of Canada's first social impact funds, BC Social Venture Partners. Richard also acts as an advisor to an international microfinance fund, many Canadian impact funds and is active in supporting groups building health solutions for the developing world. Richard is a frequent speaker on technology, finance and impact investing and was named one of Vancouver's Top 40 under 40 by Business in Vancouver. Richard earned his undergrad at Queens University and his MBA at UBC.

Dr. Esford said of the appointment, “I am extremely proud to have Richard join our Board of Directors. He has the depth of experience and a deep understanding of the life science space and the rigors of managing SMEs in the sector. He will add incredible value to our board, our sector and the companies we advocate on behalf of.”